you must do before you go…

Free 5-Day Series
to Put Your Life In Order… 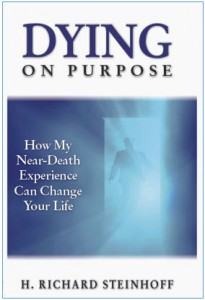 H. Richard Steinhoff is an author, speaker, and community leader dedicated to improving people’s lives. His new book, Dying On Purpose, comes out of his unique near-death experience and life-long wisdom. Richard has been a featured guest on talk radio shows in cities that include Cleveland; New Orleans; Chicago; Baltimore; Charlotte; Phoenix; and many in California, New York, and Florida; along with several television news programs, including two appearances on Fox Evening News in Los Angeles.

He has received the Man of the Year Award from the Irvine Chamber of Commerce, the President’s Award from the Muscular Dystrophy Association, and has been listed in “Who’s Who in California” as well as “Who’s Who in the West.”  He was made an Honorary Member for Life by the California Association of Realtors. He has also recently received a Certificate of Recognition for Community Leadership from the California State Legislature.

Richard is also a member of the American Mensa Society